Due to declining number of marriages and childbirths, the Japanese society continues to be aging. Consequently, the number of working age Japanese population is declining.

It is estimated to decrease to be only about a half of the whole population in the year 2065.

In order to cope with the labor shortage, the Japanese Government has implemented a new immigration policy to accept a large number of foreign workers to Japan starting April 1, 2019.

Why does Japan need foreign workers?

The Government has been encouraging women who have resigned from work due to childbirth and retired people to go back to work.

However, even with such a policy, still 350,000 workers are estimated to be in shortage, especially in the 14 fields indicated below where mostly blue-collar workers are in need. 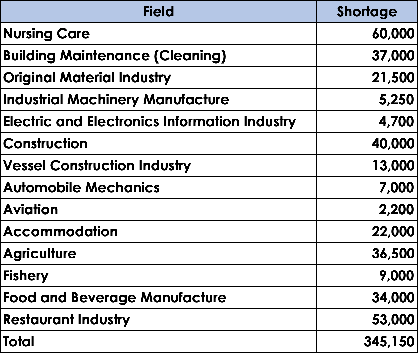 Therefore, the Japanese Government has decided to make up the 350,000-labor shortage with foreign workers.

Status of Foreign Workers in Japan

As you may know, in order for a foreigner to live and work in Japan, a specific resident status, or visa is required.

Until now, only those who have graduated from a university or college, with Bachelor’s or Master’s Degree, acquiring skills and knowledge in a specific field are allowed to work in Japan.

Most of these workers are awarded the resident status as an "Engineer/Specialists in Humanities/International Services” to work in the field where they can make use of their knowledge and skills.

Also foreigners who are married to Japanese are entitled to work in any field without any restrictions under the resident status based on their status in Japan such as a "Spouse or Child of Japanese Nationals," or a "Permanent Resident," etc.

The two categories above make up almost a half of the foreign workers in Japan.

However, a recent survey has revealed that those who are in Japan with Working Holidays, Internship or other special work program visas, Technical Intern Trainees, and students make up more than a majority of all the workers in Japan.

They have a resident status of, “Designated Activities,” or “Technical Intern Training,” or “Student,” respectively.

Some students work part-time, with “Permission to Engage in Activity Other Than That Permitted under the Status of Residence Previously Granted.”

<Resident Status of Foreign Workers in Japan> *Graph by BabyJ 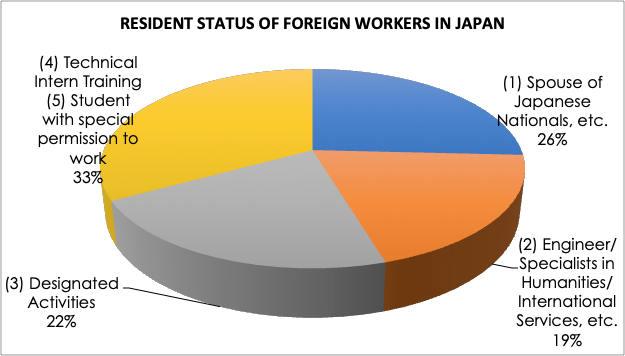 In an effort to increase the foreign work force in Japan, the government has set up a new resident status, a “特定技能 (Specified Skilled Worker),” to provide a smooth path for such students and trainees to continue to work in Japan after completing their education and training.

Regardless of your educational background, anyone above 18 years of age can acquire this status on the condition that he/she passes both Japanese language test, and skill test for the designated field.

Both Japanese language test and skill test are given several times a year in and outside of Japan (Only in Vietnam, Philippines, Cambodia, Myanmar, China, Indonesia, Thailand, Nepal, and Mongol for now.)

Those who have completed the Technical Intern Training II (3 years) will be exempt from both tests.

At the moment, the fields for “Specified Skilled Worker” are limited to the 14 fields indicated above.

In other words, with this new policy and the new resident status, the Japanese government has extended work opportunities to blue-collar workers, that used to be restricted only to white-collar workers who have completed a higher education.

To control the influx of foreign workers to Japan, the government has promoted the “入国管理局(Immigration Office)” to the “出入国在留管理庁 (Immigration Services Agency),” which is a higher position of government organs, and they have increased the number of the work force in the agency.

Japan is a single-race nation in principle. It used to be a closed society separating foreigners as outsiders.

In order to provide foreign workers with the comfortable living environment, and also to ensure that the Japanese people live and work in harmony with foreigners, with various nationalities, races, and backgrounds, the government also plan to introduce various multilingual public signs, information, and Help Offices all around Japan.

But what should change is the Japanese way of looking at everything, I guess.

The purpose of this article is to provide information that may be of interest to foreigners. This is not intended to provide recruitment and placement.